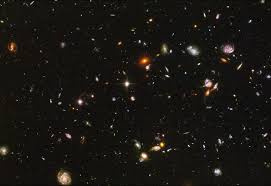 The Rocky Mountain Harvard University Club welcomes alumni from all Ivy Plus schools for this private event at Fiske Planetarium. After selling out the planetarium in 2012, we are excited for our return! This event is meant for the general public, including alumni, their families, and guests. The Fiske Planetarium is one of only seven planetaria in the country offering a high-definition viewing experience of the entire cosmos. It is a sight to behold! There will be light appetizers prior to the event; afterwards, pending clear skies, we will have the opportunity to observe through university telescopes at the Sommers-Bausch Observatory. If the forecast calls for heavy cloud cover, the observation portion of the evening will be cancelled and we'll end at 6. We advise that you check the forecast. Purchase tickets here!

Observational Cosmology: Peering into our Cosmos’ Conception Since its discovery in 1964, ancient light called the Cosmic Microwave Background (CMB), has revealed a wealth of information about the early Universe, and is one of the major pillars of evidence for the Big Bang. Currently, observations of the CMB are being used to test a theory called “Inflation” which postulates that the Universe underwent a period of rapid expansion a fraction of a second after birth, seeding the Universe with the first hints of structure. Inflation is also predicted to have launched gravitational waves, ripples propagating in the fabric of spacetime that would have imprinted a subtle curling pattern in the polarization of the CMB light, and  the race is on to search for this signal from the first moments after the Big Bang.  This evening’s talk will review the discovery and history of CMB observations, what they have told us about the history of the Universe, what they may yet reveal, and the story of the scientists who travel to the ends of the Earth in their continuing quest to better understand our earliest origins. Professor Nils Halverson is the Chair the Astrophysical & Planetary Sciences  at the University of Colorado Boulder. He has spent the last 20 years building and deploying CMB experiments. He is currently collaborating on projects with telescopes at the South Pole, in Chile, and possibly in space.

If you have questions, please contact JK Costello at jkjkcostello@gmail.com.