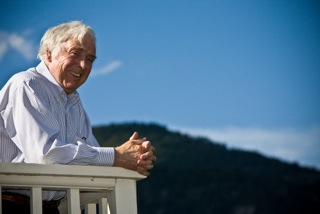 Phil DeCaro was awarded the CIA’s Intelligence Star for extreme courage under hazardous conditions (the medal awarded at the end of the movie Argo). Only a few hundred persons have ever received this award. That’s the kind of person Phil was. Phil went to Harvard undergrad, although for a time no one believed he would graduate from high school. After Harvard, Phil walked into Stanford Law School in August, requesting admission for the coming school year. He was admitted.

Phil was a lawyer, an “ivy league” rancher and horseman, a pilot, a ski patroller, a supreme athlete, a dependable friend, a counselor, a passionate advocate for progressive causes, a holder of a concealed-weapon carry card, and the most liberal person you’ve ever met. He was everyone’s ‘go-to’ guy, because he always had a solution that was usually amazingly creative and effective. His laugh could rock the world.

Above all else, Phil was a family man. He was passionately in love with his wife, Gale Gatto, for 38 years. He was a supportive, loving and active father to his three children (Lisa, Lara & Phil), and a shamelessly doting PopPop to his three granddaughters (Ella, Annabelle, and Pearl). He was a proud older brother to Jeffrey DeCaro and his wife Terese, an adoring uncle to Dru, Tricia, and Gina, and an encouraging friend to his former wife, Barbara (Lisa & Lara’s mother).

Phil’s favorite way to celebrate anything from birthdays and graduations to drop-by social visits was with an ice cream party – he loved giving the kids too many sprinkles or too much whipped cream. Evergreen kids called him The Ice Cream King, but it was an informal title he’d had for over 50 years.

The family is celebrating Phil with an ice cream party on March 9, 2pm-5pm at his home in Evergreen, CO.

In lieu of flowers, the family asks that donations be made to The Rocky Mountain Parkinson’s Association and the ACLU (National Foundation).