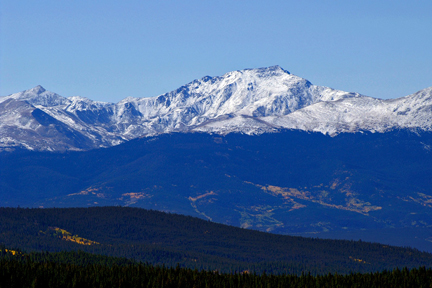 The RMHUC is grateful to Leadville photographer Jeremy Rhoades
for donating the use of his photograph, "Ivy League Tower" to the
Club.  Jeremy shot this on September 17, 2006 from the west side of
Mount Sheridan at an elevation of 11,600 feet, 19 miles north-east of
the summit of Mt. Harvard.

In the summer of 1869, Harvard geology professor Josiah Whitney (1819-1896) led an expedition of students from the Harvard School of Mines, which he had founded in 1865, to check out the area.  They named the highest peak they could see from Trout Creek pass for Harvard, and what they perceived as the second highest for Yale, Whitney's alma mater.  (Most unfortunately for our friends from New Haven, Mt. Princeton is both 3 feet taller and considerably more photogenic than Mt. Yale.)

The Harvard School of Mines closed due to lack of enrollment in 1874.  (The Colorado School of Mines had been founded the previous year.)  Its remnants were incorporated into the Lawrence Scientific School (founded in 1847), an ancestor of the current School of Engineering and Applied Sciences.  Professor Whitney also led many surveys in California, and Mt. Whitney (14,494 ft.), the highest point in the lower 48, is named for him.

There is also a Mt. Harvard (5441 ft.) in California's San Gabriel mountains.

The best highway views of Mt. Harvard are from US 285 between Buena Vista and Salida and CO 82 between Leadville and Independence Pass.

Have you climbed Mt. Harvard?  We will publish a directory of Harvard alumni who have done so.  To be included, send us a note with the date and any other relevant particulars.